It's counterintuitive, but pushing warm air to your warehouse floor makes the facility more comfortable - even at the height of summer 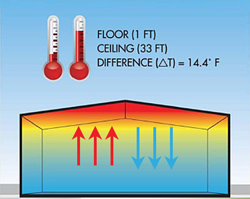 Temperature gradients occur when air is not moving sufficiently to keep rising hot air mixed with descending cool air, creating warmer temperatures at the ceiling and cooler temperatures at the floor, with temperature variations equal to about .75 degrees per foot of rise. This means there could be six degrees difference from the floor to an 8′ ceiling. In a 40 ft ceiling room, temperatures can vary 30 degrees or more. At a glance, this seems to be a good thing. The floor of your facility, where people have to operate is cooler than the air pressed against the ceiling. 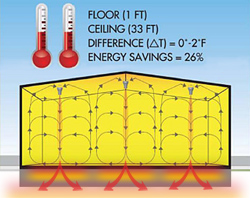 Stratified air temperatures are counterproductive, far less energy efficient, and less comfortable. It’s commonly believed to be a positive, but it isn’t. Pushing warmer air to the floor will make everyone more comfortable in any temperature controlled environment.

Why is it important to break up temperature zones, particularly during hot weather? 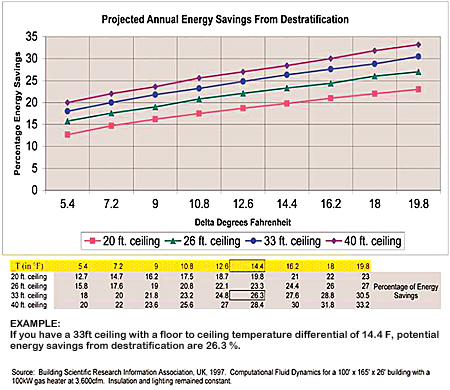 Thermal equalizer fans mitigate these temperature gradients by creating vertical air flow down toward the floor while drawing air from the ceiling area. As air is forced downward, it creates vortexes that flow outward from the downward column of air, mixing with each level of temperature gradient along its way to the lowest level. At the floor level, air is forced outward and up again, circulating from the walls toward the center of the air flow, continually mixing air temperatures.