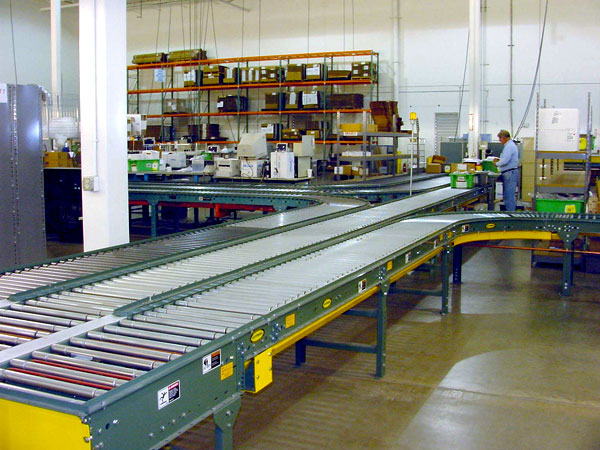 Aviall is a leading solutions provider of aftermarket supply-chain management services for the aviation and marine industries. The company represents some 180 quality manufacturers. It distributes and markets parts to more than 13,000 general aviation operators and 300 airlines worldwide. It also provides economical repairs and support services for aviation batteries, hoses, wheels and brakes.

More than simply the world’s largest independent airplane parts distributor, Aviall brings value to the supply chain by effectively marketing aircraft parts and services to customers in the U.S. and worldwide.

Aviall’s previous distribution center, located in Dallas, TX was not adequate to meet customer needs. The company had steadily grown throughout the 1990’s, and lacked the space to store and handle its ever-growing line of products.

Said Aviall Senior Manager Ken Abercrombie, “the old system was basically ‘put it onto a conveyor and send it to an area.’ We only had one sort on it. Putaways either went downstairs or upstairs—and that was it. In the shipping area, we only had one lane that went up to the shipping departments.”

This meant more manual handling for the company, which meant it took more time to ship an order. In the different ship areas, shipping personnel had to hand-sort everything. The situation also impacted Aviall’s ability to quickly receive product into its warehouse.

Knowing the situation would challenge the company even more as it grew, Aviall elected to move to a larger building with a better material handling system.

Aviall wanted to have more space—and for the new facility to be scalable, so that as the company grows, it can adapt its current receiving and shipping systems to grow naturally as product lines are added and customer demands increase. 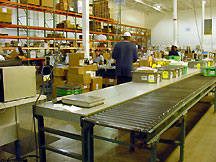 “We’re an aircraft parts distributor,” said Abercrombie. “We handle 350 different vendors, like Rolls Royce, Continental, and more. We are similar to an automotive distributor, except we’re in the aviation business. We have tires, chemicals, paint, bolts, nuts screws, washers, small engines, jet aircraft parts, lots of aircraft parts, engines and accessories. We’re the largest aviation parts distributor in the world—independent of the manufacturers. We have over 75,000 sku’s on-hand. Typically, 20% of them are fast-movers.”

The new distribution center needed to allow Aviall to easily receive material from its suppliers more quickly and more efficiently; it also needed to be able to ship product out more efficiently than it could before.

Most of the material the company ships is distributed by the Dallas Central Warehouse to Aviall’s other locations such as Customer Service Centers all over the United States that range from 2,500 to 7,000 square feet, to serve various markets. The Central Warehouse services the U.S. locations, as well as multiple facilities in Canada, Australia, Hong Kong, Singapore, and Amsterdam.

“We replenish their inventory,” Abercrombie said. “We ship directly to customers and to our other DC’s from Dallas.”

Aviall moved into the new facility, in a transition so smooth that all its parts bins—units of steel shelving, including all loaded inventory—were moved into place over a weekend.

Now, received items entering the facility are placed either in bulk storage (pallet racks), or sent to receiving stations where technicians put small items into totes and add a coded tag to each tote. Totes are then conveyed to appropriate putaway zones and diverted on sortation conveyors to be placed into inventory. With more than 75,000 sku’s in the facility, this reduces the time it takes for received items to make it into inventory.

The conveyor system is an integral part of the facility’s improvement. In the receiving area, it has allowed Abercrombie to design much more efficient putaway zones for his operation.

“I have more space on my conveyor line today to process my small package receipts. I also have four drop-off points in the bin area for different zones for putaway. I didn’t have that before,” Abercrombie said.

The shipping operations were improved at the new Central Warehouse, as well. “In the shipping area, we only had one lane that went up to all the shipping departments,” Abercrombie said. “Shipping personnel had to hand-sort everything.”

The new system has added automation to Aviall’s shipping process. “Now, we send it to four different lanes in the shipping areas, so it’s sorted for our people by the time they get orders to ship.

For instance: Nearly everything Aviall ships has to meet FAA requirements, so the company requires its suppliers to send certifications attached to the material or its packing slip. Aviall’s general aviation customers sometimes request a copy. The material handling system automatically sends it to the certifications areas. 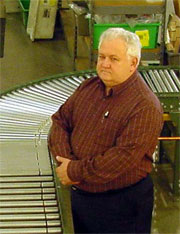 Aviall is able to serve its customers better and add new product lines when they’re needed.  Even in the tough times the aviation industry has seen over the past two years, Aviall has grown, increasing its market share and gaining customers as it provides more parts, faster, and with increased service.

Since the move to the new Central Warehouse, Aviall has sped up the process of getting product into a tote, affixing a tote label, and getting it to the right packing and manifesting areas. “If the product gets from picking to manifesting faster, we’re more efficient,” Abercrombie said.

“I like the space, and the layout is better in the new facility. The old facility was two separate buildings, and we were on a mezzanine. We were crowded—basically maxed out. We’ve got a lot more space now to add product lines when we need to. We even have room to grow now beyond what we have already added.”

For Aviall, the sky has always been the limit. Now, with a modern, efficient distribution center, the company can climb even higher.