What makes a beef plant different from a chicken plant?

Other than the obvious, material handling makes it different. It's hard to get a whole steer into a 22-inch long box. It's harder to handle all the mass of that steer inside an operation efficiently, process it quickly, and get it out to retailers and importers efficiently.

At its Dodge City, Kansas, plant, Cargill Foods' Excel Beef Division has managed getting several thousand head a day into beef boxes at the rate of about 7-8 boxes per steer for years. Fresh beef warehouses turn at the rate of once every 1 to 2 days, so you begin to get a picture of a blur passing you by tractor trailers of steers coming in, tractor trailers of box beef going out.

The cattle drive doesn't stop when the processing begins. The difference is that now it goes from beef on the hoof to beef on the conveyor.

As a result of the construction of a new shipping system, called the Order Delivery System, Dodge City now has the distinction of being the largest capacity beef processing plant in the world. Previously, it had the capability to receive and process 5,600 head a day; an amazing feat for an industry that prides itself on its high efficiencies.

When that information is converted into material handling statistics, it comes to this: 40,000 boxes a day were produced, packaged, boxed, stored, committed to orders and released in quantities from a few boxes per line to a full truck load of one SKU or product.

Maybe the most amazing part of this story is the fact that every pound of beef needs to be tracked from steer to box and package, all without ever stopping for more that a few hours or days for the slowest movers. This kind of sophistication would draw attention in any distribution operation, especially one in a cooler. Implicit in this part of the story is the information system. Besides tracking the product throughout the facility, the plant IT manages the inventory management of every by-product from hides to bone.

However, the IT story in this discussion starts in the distribution side of the facility, beginning with the first box to appear from the case sealers and all the way out into the truck. 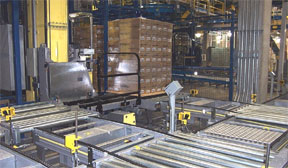 Excel Dodge City was the first highly automated beef distribution operation in the world, even before computers and material tracking system and controls were very mature. This bit of pioneering in the early 1980's tested the mettle of the already tough plant engineers and operators and did not come without some pain. The vision for the software package was: (1) it would allow the operations personnel to make shipping decisions based on availability of product, and, (2) fill orders perfectly within compact and environmentally-difficult cooler conditions.

Tough customer order requirements entered into this automated distribution vision. Excel had to provide the best product to match the customer's order for cut, grade, and freshness at arrival while still maintaining dynamic inbound and outbound flow.

Excel Beef management knew that postponing the decision to commit boxes of beef until the last minute was the key to successfully managing tight margins. Not knowing the beef grade until after it was processed meant there was only a day and a half of product on-hand to make decisions from. Real-time information and spontaneous, accurate handling was critical to customer satisfaction measurements and maximum margins.

The old way of working:

In spite of the difficulties of technology, the Dodge City plant's original design employed an IBM Series 1 Computer and a variety of home grown controls to manage the box rate coming in from the box sealers. The plant focused the 40 box per minute material flow rate around a two step inbound sortation and accumulation conveyor system that exists today.

This first sort and accumulate allowed the plant to build stacks of single SKU boxes on 'captive' pallet boards, which it released to its AS/RS. When orders where let down from Wichita, shipping personnel reviewed available pallets of product and released them to depalletizers where a box stream released product to a shipping sortation system for loading into waiting trailers, lumped box at a time in order sequence. This process sometimes repeated itself several times for a trailer, as the right match between product availability and orders became obvious to the shipping managers.

What changed to cause a capital project?

The nature of the beef industry changed in the 1990's. Demands for orders and order quality escalated. The grocery industry would not accept the practice of 'lumping' boxes onto the floor due to damage and labor costs in receiving. As a result, GMA pallets entered into order requirements. The days of unloading a truck and tying up limited dock doors with valuable labor were disappearing.

The need to increase capacity for the plant, along with managing a wider variety of box sizes really made the issue of how to manage the entire material handling process a serious concern  for every beef plant, including the groundbreaking plant in Dodge City.

This material handling problem included Japanese export grade beef in the smaller 40-pound box size, which meant more boxes per hour to handle and a need to maintain perfect appearance.

Plant Management at Dodge City focused on the issues, having observed how three recently designed Excel facilities had attempted to build highly automated and mechanized production and shipping buffers to service the pallet based order systems. The other sites had utilized a light duty AS/RS and conveyors. The advantage each of the other Excel facilities had over the Dodge Plant was that they did not have an existing distribution center and could develop a detached DC building and operation on an adjacent lot.

The team also observed that previously selected equipment had not been intended to manage the highly misshapen, and often damaging 100-pound beef box.  Based on the long-term investment being made, the Dodge City team felt they needed equipment that would be rugged and durable to deal with the plant and product conditions.

Software as an advantage:

In part, the ability to re-use and expand the highly customized software that Excel had purchased during a mid-1990's upgrade from a specialized material handling company called Retrotech, Incorporated gave the project a simpler start.

The project's brains were already in place and performing beautifully; the body (the material handling equipment), both in place and for the future new building, needed careful evaluation to meet the new goals for maintaining production flow and shipping objectives.

The plant team set out to work with Retrotech to develop a new material handling system to deliver pallets to the dock with the least manual interaction. The plant could not stop its material flows from production; the new shipping system would have to integrate with the plant without disrupting daily operations.

Previously, fast movers (called stack-off products) were run around the old mechanized DC to optimize the demand flows to the docks. In the new system, they needed to be incorporated into the DC. In addition, a lofty goal of 100 trucks a day shipped was set, meaning that over 60,000 boxes shipped days were targeted for the design peak.

All this had to happen with near-zero downtime. Ultimately, all the equipment would need to be rugged and durable to deal with plant conditions.

The plant team analyzed Retrotech's designs, as well as evaluating the competitive design of the other plants. The data from orders and automated inbound flows seemed to indicate some balancing for performance could be gained by combining individual box storage systems with full pallet storage systems (pallet storage AS/RS). This concept had been somewhat proven from the other Excel facilities' experience.

Mixed-box orders could be pulled from a combination of flows from the mini-load box AS/RS and the existing de-palletizing station in the original building. Once sorted and released to the palletizers, an on-demand rate of up to two pallets a minute could be delivered for optimal pallet patterns and, if clients desired, stretch wrapped. These functional elements of storage, combined with the right mix of high-speed sortation and accumulation conveyors, could deliver the punch needed to achieve both the flexibility for orders, which ranges widely, along with meeting the needed rates in and out.

The last design consideration focused on shipping flexibility to meet the widely differing order instructions. Some clients still wanted lumped boxes into trucks, others stretch wrapped GMA or CHEP pallets, while still others wanted slip-sheets. To manage this complex range of needs, a pallet exchanger was added to the equipment mix to give the right final touch to the order without having to commit product ahead of time to a shipping instruction -- an ultimate flexibility.

In addition, extendable conveyors were designed in to service lumped trucks onto the new dock area. Ample consideration was put into flow paths to assure a work around for problems that had always existed.

In particular, the physical locating of box conveyors was a huge issue; many conveyors were threaded between and into working conveyors in the original building and others needed to enter the new building at the 50-foot mark. Software needed to be able to operate the day-to-day operations while changes were finalized to bring up the new material handling systems. Phasing and testing small sections of work and sub-systems greatly enhanced the ability to complete the work without disrupting the plant operations. The Excel Plant and Retrotech Project team was able to plan and execute a near perfect implementation and integration.

The final Retrotech design, a truly integrated system, was delivered and is operating at new operational peaks. A system of Unit-load (pallet) and Mini-load (box) Swisslog hi-performance S/R machines and racking along with Swisslog pallet conveyors were installed.

Hundreds of lineal feet of Hytrol case conveyors and sortation systems from project partner Cisco-Eagle were laid out to optimize cubic footage and provide for future changes.

In the new system, boxes flow smoothly in from the original building, both from the existing material handling storage system as well as products that were just released from the processing floor. Some product migrates directly to the mini-load AS/RS box buffer while other product is being sorted and accumulated for making full pallets to go into the U/L AS/RS. 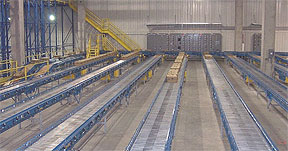 The system was designed to be scalable. A third palletizer will come online soon. The original design had protected a spot for that equipment, with the thought that a mixed box build order would be accumulated in the new building sortation lanes and released to the palletizer to service optimum cubed, palletized product. The Retrotech software will accommodate the sequencing and release of products to assure properly built pallets based on box size and weight.

Other future additions may include the 'build out' to the maximum quantity of mini-load AS/RS aisles that were considered in the original layout and perhaps some additional pallet exchangers for Stack-off products.

The planning showed Excel where excess equipment performance was available and how it could deliver catch-up capability when needed. In addition, it allowed sub-system testing to be clear to measure and clean to test. As a design process, it worked.

The plant continues to break shipping records on a frequent basis. Oh, and in answer to the question, "Where's the beef?"

It's moving fast and accurately in Dodge City.