Technology Rentals and Services tests computers on its returns system, allowing the process to move forward much faster and more accurately

"The accuracy the system has allowed us is key. If we promise customers it will be there, we make it. We used to have to fly it out, or counter-to-counter it."

If you want to make a distribution center manager cringe, just whisper the word "returns" to him.

Quite likely you'll have uttered one of his least favorite words. After all, e-commerce companies in recent years have learned at the price of pain and expense that shipping an item can be relatively simple while properly receiving a returned item is not.

Imagine if nearly everything your company ships had to eventually return, be repackaged, reconfigured and shipped again. Imagine that every second returned items spend on your receiving dock, being processed, or in your shipping area costs you money.

That's the situation Technology Rentals and Services deals with every day. It's a unique material handling challenge, but the company has overcome it and turned the daunting task into an operational strength.

TRS is one of the largest equipment rental and leasing companies in North America. It offers a wide range of electronic test and measurement instruments, telecommunications test sets, computer workstations, peripherals, and digital broadcast media equipment. Its large investment in inventory and quick delivery has kept customers satisfied and driven growth for the Dallas-based company.

Almost everything TRS ships is leased or rented, meaning that it will eventually return to the company's distribution center. This makes the return process - the bane of many distribution operations - a vital business process for TRS. 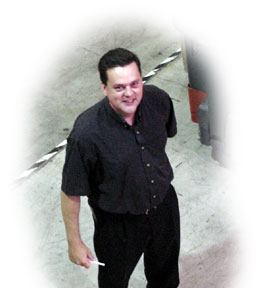 Because of the unique nature of TRS's business, the receiving area had become a bottleneck.

Arriving computers were taken off the receiving lines and placed onto carts. The carts were pushed to areas where the computers were sorted based upon their next destination -- stock, repair, cleaning -- and would then continue on carts.

Given the volume of incoming equipment, this system was a problem for TRS. The primary bottleneck was one of throughput. The system relied on workers to get work at their discretion rather than push work to them.

The facility layout didn't allow TRS any tracking capacity. When received equipment was being processed by cart, the company had no way of knowing where items were without physically tracking them down.

Workers had to touch incoming equipment too many times, and TRS realized that every time a product is touched by a person inside a material handling process, costs would rise.

Warehousemen in the old system found their own work, without any designated flow.

The solution utilized existing gravity conveyor sections and ball transfers. It added new straight and curve conveyor sections, and laid out a flow solution. Items are now sorted, reused and recycled. "The first conveyor we installed was all gravity with 6 receiving stations," Bray said. "That helped cut down on our receiving problems. We got caught up. We started receiving everything the same day it came in."

"We were instantly able to recycle $20,000 worth of packing material a month because of the upgrade," Bray commented. TRS saw instant return on investment just due to savings in packing materials. "We paid for the system in the first month of operation just with packing materials savings."

The big payoff was TRS's enhanced ability to control workflow. "The conveyor enforced a work process," Bray said. "The system set the pace, not the warehouse receiving personnel." 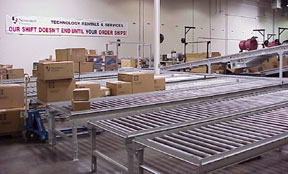 In fact, the time it took to process returned items into the system dropped from eight hours to four hours. Monitors, for instance took two weeks to process before the upgrade. Afterward, the time dropped to 24 hours.

This project was just the first in a series between TRS and Cisco-Eagle in a developing partnership. The next phase came in a significant renovation of TRS's shipping system.

Bray knew his receiving system would require further work, but his next priority was TRS's shipping system. In the system, pack line conveyors were gravity sections feeding onto a powered takeaway. Manifesting took place at the end of the powered section resulting in a bottleneck. Customers required different shipping companies based upon what time the order went out the door. The shipping phase was from 2:00 PM to Midnight. Time to process an order and get it out the door was one hour, thirty-six minutes.

The bottleneck at the manifest area was a significant hindrance. Because it couldn't make Federal Express deadlines consistently, TRS was forced to bear extra costs to utilize a range of different shipping companies.

As was the case in receiving, the shipping process depended on workers to find work on a cart to package and process. Individuals dictated throughput, not the company's material handling system.

The previous system compromised order accuracy because it didn't enforce consistency. "Light orders were getting packed first," Bray said. "The order packer could pick whatever he wanted to."

The manual system compromised TRS's order accuracy. In some instances, the main unit would be on one shelf and the accessories would be on another. "The packer might get the units and not the accessories," Bray said. "Orders could be shipped without accessories. Our tote system now makes that mistake impossible."

In the new system, gravity conveyor was placed outside of the lab for order staging. The shipping manager inducts the orders into the system when ready. Orders are placed into large totes with a reflector on one end. Hytrol EZ-Logic conveyor accumulates the totes before the ship-sort system.

There are ten packing lines that can be opened, closed or forced. At 2:00 PM when shipping is light, lines one and two might be the only lines open. Throughout the evening additional lines are added as needed based upon volume. Photoeyes on the pack lines determine workload and the orders are distributed evenly across all open lines. This keeps the workflow consistent, allowing the pace of work to be determined by the system not by individuals.

There are five incline takeaway conveyors. One is shared between each pair of pack stations. Packers can individually generate a shipping label at their stations, eliminating the need for a downstream manifest station.

The completed boxes are placed onto the incline conveyor and transported to the shipping dock. The label is scanned and the box is diverted to the correct shipping line. Shipping line designations can be changed at anytime depending on needs.

Photoeyes on the shipping lines tell the system when a line is full and to roll the next box over to the secondary shipping line. No-reads are usually sent to the "no read/credit hold" line for further inspection. 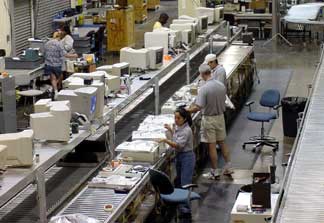 Size and weight of order has been made irrelevant since the installation of the system. Previously, workers had to lift items from the bottom shelf of a cart. "We're not bending over to get those anymore," Bray said. "They come in on the conveyor."

The entire work environment is now about waist-high. Workers don't have to lift high or grab low.

The system slashed TRS's freight costs by 33%. It reduced order-processing time by 53 minutes, resulting in 43-minute turnarounds from order to ship.

It also allowed TRS to shift workers from shipping into other areas. At one time the company heavily depended on outsourced labor. TRS has needed to employ outsourced labor only a few times since implementing the system. It was once a routine part of operations.

"We've had less need for contract labor and services than we have ever had," Bray noted. "The labor cost savings for not adding positions as we grew has been significant."

"The accuracy the system has allowed us is key," Bray said. "If we promise customers it will be there, we make it. We used to have to fly it out, or counter-to-counter it. Not anymore."

"The system actually allowed us to change our shipping shift," said Bray. "It got so bad that the shippers were coming in at 3:00 PM and working until Midnight. It wasn't uncommon for overtime to stretch that to 3:00 AM in overtime. Now, the shift is 12:30 to 9:30, and there is almost never a need for overtime."

"Our lead packer asked how we ever did this before," Bray said.

The receiving system gets another upgrade

After the shipping system upgrade was complete, Bray turned his attention back to the receiving system.

"It was working great after the first receiving project, but the second project took it a step farther," Bray said.

Space was a driving factor for the second receiving upgrade. TRS needed to create more space in its facility.

"When we returned to the receiving area," Bray said, "we realized we needed more lab space and more room. We believed we could start doing a lot of what was previously lab work in the warehouse area. That let us better utilize our technicians. Plus, it cleared the lab space we needed."

This was an important element of TRS's success. The company found it could merge the work normally done in labs into the warehouse. Technicians were able to focus on the most important technical aspects of business while TRS's warehouse staff took on certain aspects of the operation without compromising the quality of service. It resulted in TRS being able to grow without hiring as many lab technicians.

The concept involved the installation of power conveyors and a data model that allowed a lab LAN to the warehouse. A two-deck system was installed that could simultaneously load up to 120 computers with new software off the lab LAN or disc duplicators.

When returned equipment comes to the receiving department, it is fed onto the power conveyor system. "The conveyor system is our lab now," Bray said. Monitors and printers are routed in one direction for TRS's direct-ship process PC's. Notebook computers and projectors are reloaded and reconfigured to be made available to rent again.

This makes the material handling system an integral part of TRS's lab and processing systems. It isn't just using the conveyor system to move products. It has become a part of the process.

Days in Due is TRS's measurement for the time equipment is "off-rent" until it is ready to rent again. After the new shipping system was installed, Days in Due has dropped from 2.5 days to less than half a day on desktop and notebook computers. Instruments have gone from six days to less than a day. "Monitors and printers took two weeks before the new system," Bray noted. "Now they're ready the same day."

TRS calibrates some instruments internally. Whether it's oscilloscopes or power meters, they are able to process some of that outside in the warehouse without sending it to the lab. They have gone from over six days to less than a day on instrument turnaround.

"When equipment is in due status, it's not available for rent," Bray said. "That's lost revenue. If you can get it back out the door, this equipment generates revenue. When it's sitting in our warehouse, it's a cost."

The benefits go beyond turnaround time. Automated data facilities are now used for TRS's large outgoing orders. "If we're going to send computers to a show that uses 400 machines, it doesn't make sense to run all of them into a lab, set them on benches, and move them back off the bench manually onto a cart," Bray said. "We'll put it on the conveyor, use the LAN to load what's needed on the machine, and send it off. The conveyor system has made us really competitive in that market."

TRS and Cisco-Eagle started together with a simple receiving upgrade and moved into more projects as the two companies discovered ways to work together.

"We brainstorm a lot," Bray said. "We play off of each others strengths."