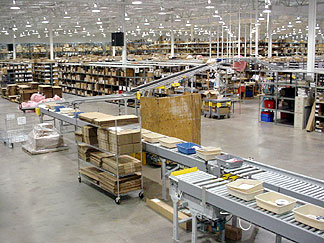 Mouser’s product line includes Semiconductors, Passives, Interconnects, Electromechanical, Power Sources, and Specialty Products. From its state of the art warehouse, Mouser Electronics ships most orders the same day they are received - many orders are shipped in as little as 15 minutes.

Mouser is a wholly owned subsidiary of TTI, Inc., one of the largest global distributors of Passive and Interconnect components. (A performance report on TTI’s innovative distribution center can also be found on this website.)

"In the electronics business, the products definitely change," said President Glenn Smith. "Our customers understand that they have to add new products to grow. We have suppliers who get 30% or more of their sales just from new products. That new stuff gets designed by engineers…and our customers are engineers." 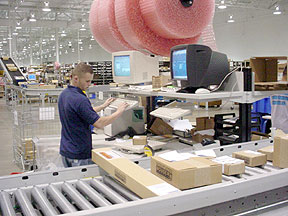 In its Mansfield, Texas, distribution center, Mouser elected to utilize material handling to sustain excellent customer service. Mouser stocks over 104,000 sku’s in the facility, with constant growth in the variety of inventory items. Mouser utilizes a single ten-hour shift.

Mouser moved from a smaller facility into its new 170,000 square foot DC in 2002. The new facility came together with equipment from the old building. "We had a takeaway line of conveyor that was loud, old and used," said Pete Shopp, Operations Director. "It was minimum pressure accumulation, not zero pressure. It also had pass through gates people had to mess with to cross the conveyor line. We had tubs dump over on that conveyor. It just didn’t accumulate right."

Mouser utilized carts and baskets in its shipping area. During peak times, the shipping area became congested. Said Shopp: "When we were throwing everything into carts or baskets, we were making mistakes. We found out that some things would get put into a cart and hauled off without getting processed. Or they were thrown into the wrong cart. It was congested - we couldn’t get stuff in and out of there."

Foot traffic in and out of the shipping area was constant due to employees needing to leave their workstations to get shipping cartons or other supplies. "It caused a disruption in the flow of work," said Shopp. "It wasn’t efficient to have people stop picking orders to chase boxes down."

"The biggest factor that told us we needed more automation was the increase in orders and lines - 25% more orders and 35% more inventory," said Smith. "Just last week, we added over a thousand brand new customers - we’d never heard of them before. With that increase, we knew we had to do something." 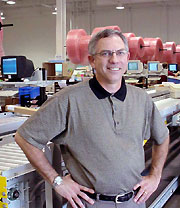 Mouser focuses like a laser on satisfying its customer base. That means shipping orders faster than anyone else in the business and making sure those orders are correct. The company zeroed in on meeting its promised ship dates when it decided to automate its distribution center. Its customers swear by Mouser’s service, but the company knew it would have to create more efficiency in its warehouse to handle the increasing order volume and ramped-up demand. It had to stock a larger variety of products and still be able to ship them effectively and quickly. (Right: Mouser President Glenn Smith, standing near the shipping department in Mouser's upgraded new facility).

Any solution had to reduce walk time for employees by making sure they could spend all their time picking and packing orders and not pushing carts, replenishing cartons, or other shipping supplies for their workstations. Mouser also wanted to increase the amount of usable workspace for each employee, as conditions could get cramped and difficult during high-volume shifts. 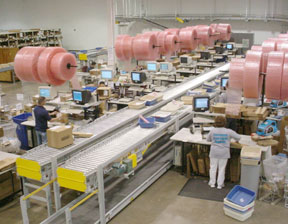 A significant goal was the ability to change the way it picked orders in the future. Mouser intended to switch from pulling by lines instead of pulling by orders and utilizing its conveyor system. "We are going to make a major change to the way we operate in the future," said Shopp, "and our current system must tie into that." Currently, orders are picked into totes and conveyed to the shipping area. In the future, totes will disappear from the process.

Mouser’s system, implemented in phases, accomplishes all its goals. Said Shopp: "If we didn’t have this system, with our growth, I don’t know what we’d be doing. We have increased our inventory value 35% in nine months."

Originally, the automated distribution center project allowed Mouser to increase its daily output from 1,750 to 2,250 orders per day. That’s increased to more than 5,000 orders on a peak day as the company added customers and shipping stations. Each order involves an average of 3.6 picks, thus over 18,000 total lines picked on peak days.

Mouser picks its most active items from carousels and feeds them onto a conveyor line that feeds the shipping area. Slower moving and bulky items are stored away from the conveyor lines, while the busiest items are situated in bins and shelving near the conveyor line. A dedicated section deals with ESD and Moisture Sensitive parts to ensure they are handled safely and correctly. 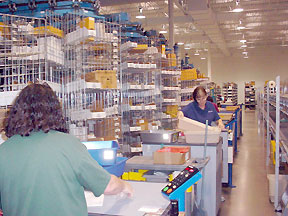 Much of the improvement has come from reducing congestion. "With the completed carton takeaway conveyor," Shopp said, "a key was the amount of accumulation we were able to design into it without losing any floor space at all. It was built against an unusable back wall, up in the air, and over existing areas."

In the shipping area, selected stations are equipped to handle UPS, FedEx, COD, and international shipments. This helps Mouser process shipments more efficiently. "Those Orders requiring special shipping methods are marked with reflective tape so they get automatically diverted to the right shippers," Shopp said. "Before, it was kind of ‘pack-and-throw’. People would get whatever, and we didn’t have an automated system."

The system balances the shipping lines out if one is full (and the other empty or nearly so). Said Shopp, "At the busiest time of the day - usually at the end of the day - when we have completed FedEx and international shipments, the system keeps both lines working at an even rate."

Mouser considers the quality and accuracy of its shipments to be paramount, but didn’t anticipate that its new material handling system would enhance quality as much as it has.

How much has quality increased? "A lot," according to Mouser President Glenn Smith.

"We were thinking it would just make us more efficient," Smith said. The system helps Mouser be even more customer-focused than ever. "We had a goal to reduce footsteps in the warehouse, but we were thinking mostly about productivity. We didn’t anticipate the quality increase we’ve seen."

"Errors have declined 25%," Smith said. Considering over the same period that Mouser hasn’t needed to add personnel or increase work hours, and has seen a 25% increase in its business, the quality increase is remarkable. Mouser defines quality as the total number of errors vs. line items shipped.

"We think one of the biggest factors is the fact that there are fewer footsteps in the warehouse," said Smith. "People aren’t as tired. They are more productive and they don’t make as many mistakes. There’s no question that the system had a significant impact on the quality."

"The reduced congestion has been a huge part of our overall improvement," Shopp added. "I think a lot of our improvement is our new packing stations."

The design of the new pack stations has increased the amount of useful packing space. "People were cramped before - almost tripping over their workstations with monitors, keyboards, boxes, and product all in a confined workstation," said Shopp. Now, they have room to work in a more ergonomically designed packing station.

Before any of the shippers arrive at work, their packing stations are loaded with the supplies they’ll need for the day. "Combine it with the bubble wrap rolls," Shopp said, "and you’ve eliminated a lot of downtime simply by allowing people to pick more orders without having to get boxes and supplies."

The ability to adapt to future requirements

Mouser’s goal of being able to change its facility for future operating requirements was satisfied in the project. The company can convert to its preferred picking and shipping methods when the time comes.

An appealing, safe, and pleasant facility 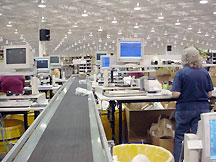 Besides making order picking more efficient, the conveyor overpasses mean employees don’t have to deal with lifting gates during their shifts, a definite ergonomic improvement. "For us," said Shopp, "that was a great thing."

Belt conveyors added another quality-of-work advantage: silence. "The new belt conveyors compared to the old roller conveyors has made things a lot quieter," Shopp said. "Plus, they conform to our future requirements."

Mouser also pursues a pleasant working environment. Its vendors, suppliers, and customers are impressed with the new warehouse. "It’s a ‘wow’ factor," said Shopp. "It’s an image we want to encourage. We set up the warehouse with good lighting, air conditioning, dry walled walls, and textured, painted ceilings. We want it to look nice and be a place people like to work."

Mouser isn’t finished growing and continues to expand its business with a keen eye on its distribution and warehousing systems. The company has become so adept at distribution that it now acts as a 3PL (third party logistics) company for a few key vendor partners. Mouser expects that part of business to grow as well.

Since this article was originally published, the company announced a new 225,000 square foot expansion project to add additional capacity and growth. Cisco-Eagle was recently selected to implement a material handling system for the expansion.