The age-old argument of top-versus bottom-driven horizontal carousels comes up all too frequently (at least among carousel people). You may think it doesn’t matter that much but in fact, it makes all the difference in the world. Supporting something from underneath makes sense. After all, trains, cars and most rolling objects are bottom-supported. Yet, the best designed horizontal carousels in the world are top-supported units that outperform bottom-supported units in both speed and efficiency. How can that be?

Would you rather hold a briefcase in the palm of your hand or carry it by the handle?

The handle (top-supported) is the obvious choice, letting gravity serve its purpose to keep things in place and in turn, allowing you to run through the airport or quickly change direction without slowing down. Top-driven horizontal carousels function in much the same way, providing greater speed and flexibility.

Trains provide another good example; they have great load bearing capacity and are fine for long hauls in the same direction. However, if they need to make tight turns, reverse direction quickly or accelerate to high speeds, the train has the potential to derail. This is why train rails have banked curves that keep the load on the track and running as fast as possible. 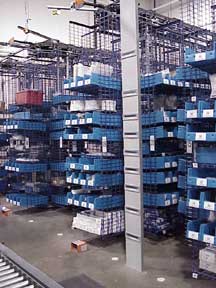 Unfortunately, horizontal carousels do not allow for banked curves. We are left with two options: slow the equipment down to avoid jumping the track or capture the running gear.  Top-driven carousels are based on the latter, taking advantage of the intrinsic benefits.

Short carousels with high pick rates need to move quickly and accurately to the next position to optimize order picking. Speed is also important with long carousels containing slow moving items, especially in buffer systems in which storage approaches capacity. Minimizing wait time before arriving at an empty slot is critical to the performance of a system. The same is true when trying to pick the last item of an order – that one particular box (likely in the farthest bin) may be holding up the truck waiting to get on the road. Diamond Phoenix’s eight bearing, four yoke, top-driven design enables the unit to go in the opposite direction quickly and up to 50% faster than bottom-driven units. By distributing the load over a greater surface, capturing the wheels around the stainless steel track and taking turns in smaller articulated bites, the carousel makes a much smoother turnaround (after all, carousel bins change direction in approximately four feet of track). The one limiting factor is the ability to keep the product contained within the bin as it speeds around a curve; in many cases, the carousel could go faster, but customers would have problems with product flying out.

Speed is not the only advantage of top-driven carousels. Load sharing across all eight bearings of a bin better distributes the weight on the track. In addition, the “Y” design of the yoke assembly provides two load paths around the track, minimizing the wear surface (as opposed to bottom-supported units that have one central load bearing surface). This puts the running gear in contact with both sides of the support tubing. The use of tubing in bottom-supported carousels sometimes results in fatigue cracks because the track surface is point loaded with just two contact points.

Another subtle but important advantage of the top-driven design is the ease of leveling the units during installation. Instead of leveling or grouting the bottom track to suit uneven floor conditions, our top design has a built-in leveling feature. Rather than placing shims between the floor and the bracket, the brackets are lagged directly to the floor and spacers are placed inside the support columns. This avoids unsightly shimming, ensures secure fastening of floor brackets (no shimming space) and distributes floor loading across the entire bracket. Because the shims are within the columns, they never become loose or get lost. Once the machine is level, stanchions are placed into the columns and the top track is placed with no adjustment required.

In top-driven double or triple stacked carousel applications, the levelness from the lower machine is carried all the way through to the top machine. Leveling must only be done once on the bottom carousel and never has to be adjusted on the higher machines or at intermediate mezzanines. The system remains level and distributes the load directly, keeping additional framing to a minimum.

Finally, in top-driven horizontal carousels the running gear is part of the top frame assembly rather than the bottom of the bin. This allows us to set up and test every carousel before it is shipped from our manufacturing facility as a final check of quality and workmanship.

Better horizontal carousel design leads to better implementation, a more dependable system, faster retrieval times and improved productivity overall. No matter what the size of the application, a top-driven design will perform to your expectations and will hold up better in both the short and long term.