There are many options when it comes to crossing over a conveyor line, pipe run or other obstacle 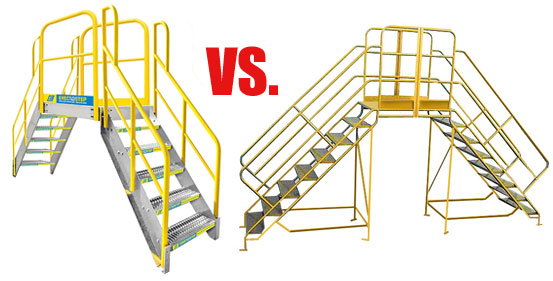 In many operations, things like conveyors or pipe runs or other machinery interrupt the flow of a work floor, and the obvious way to get around it is to erect a crossover. This is commonly done in larger scale conveyor systems with longer lines, but we also do them for other areas where going around the obstacle could take significant time, or where access is limited by other factors. The question is, what type of crossover best fits your needs?

In the past, many if not all crossovers were custom fabricated. A lot of people built their own, and some of those home-made jobs were not exactly engineered for safety. They were also scrap metal if something changed in the operation and their current configuration was unsuitable.

That’s  not the case these days – there are relatively economical pre-built crossovers that can fit just about any need, and that meet local building code and/or OSHA safety guidelines. Your access choices now are more diverse than ever. What we’ve run into lately is the option for a permanent crossover, built for the task, and mostly designed to stay in one spot compared to the modular crossover, a flexible crossover system built from common components, but that can be made to fit virtually any space or application.