Crossovers vs. overpasses vs. gates

The extensive conveyor lines that snake through many distribution facilities allow operations to transport, buffer and direct loads in a way that takes the best possible advantage of space. These conveyor systems are essentially the core around which a lean, efficient material handling operation is built, but they also create barriers to people moving around the facility since they can block the flow of foot traffic.

It’s neither safe or productive to have very long lines of conveyor that can’t be crossed. For productivity, people usually need to move around a warehouse, even if they spend extensive amounts of time in a stationary role like assembly or order picking. Workers need to be able to switch positions, cover different areas or access supplies. Even if the walk around is only fifty feet, that can be multiplied by the number of times the walk happens, the number of people who have to do it, and the number of shifts per day. This wasted time mounts up.

More importantly, it’s unsafe for people to walk around a long line in the event of an emergency evacuation. Local safety and fire codes may differ, but you need to understand those regulations and comply with them at the minimum.

Alternatives for passing through a conveyor line 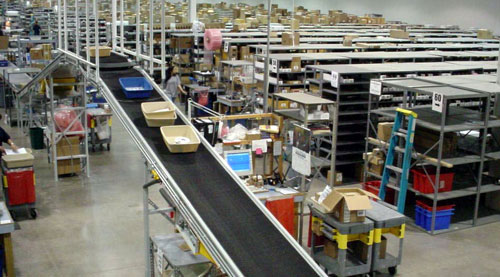 Conveyors are sometimes built with “overpasses” that incline a line up and overhead, then decline to create a crossing point. This method is efficient from both space and productivity standpoints.

An overhead system is frequently used in a long line, such as in front of a large number of picking bays. This allows people to pass beneath it in either a controlled situation (the crossing points are blocked except in an approved space or spaces) or beneath the entire run of conveyor.

This style is typically used to allow large amounts of traffic to cross at the same time. In some cases, forklifts can use these passages.

Crossovers for frequent crossings in areas with available space 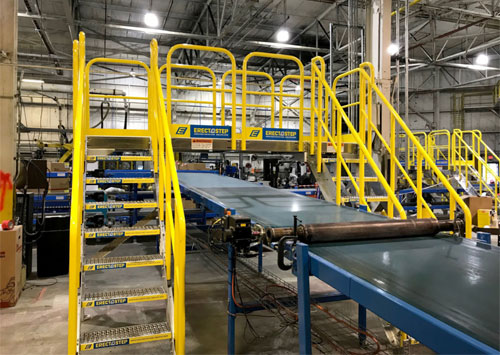 Crossovers are an ideal way for people to pass over a conveyor line without interrupting product flow, but they require space on either side of the line in three ways:

Crossovers are convenient for warehouse personnel. If people pass through carrying loads, a crossover can allow them to do so without stopping to open a gate. They tend to be more expensive than gates, particularly gravity gates. Use crossovers when you have space and frequent traffic. In those situations, they are worth the cost difference vs. a hinged gate and may be less costly than an overhead incline/decline solution.

Crossovers are ideal for crossing multiple, parallel conveyor lines. Gates are impractical for these applications, as people would have to open multiple gates to pass.

There are many crossover alternatives. For instance, for certain applications, you can cross using ladders rather than stairs.

Conveyor gates are fitted onto the line and must be manually opened and closed each time they are used. They are typically the most economical solution to crossing a conveyor, and also have the tightest footprint, in essence absorbing no additional space, either vertically or on the sides of the line.

For the right application gates are the ideal solution, but there are aspects of this option to consider:

Use gates for safety applications where space is tight and where crossings are infrequent.