How to Place Crossovers on Rooftops 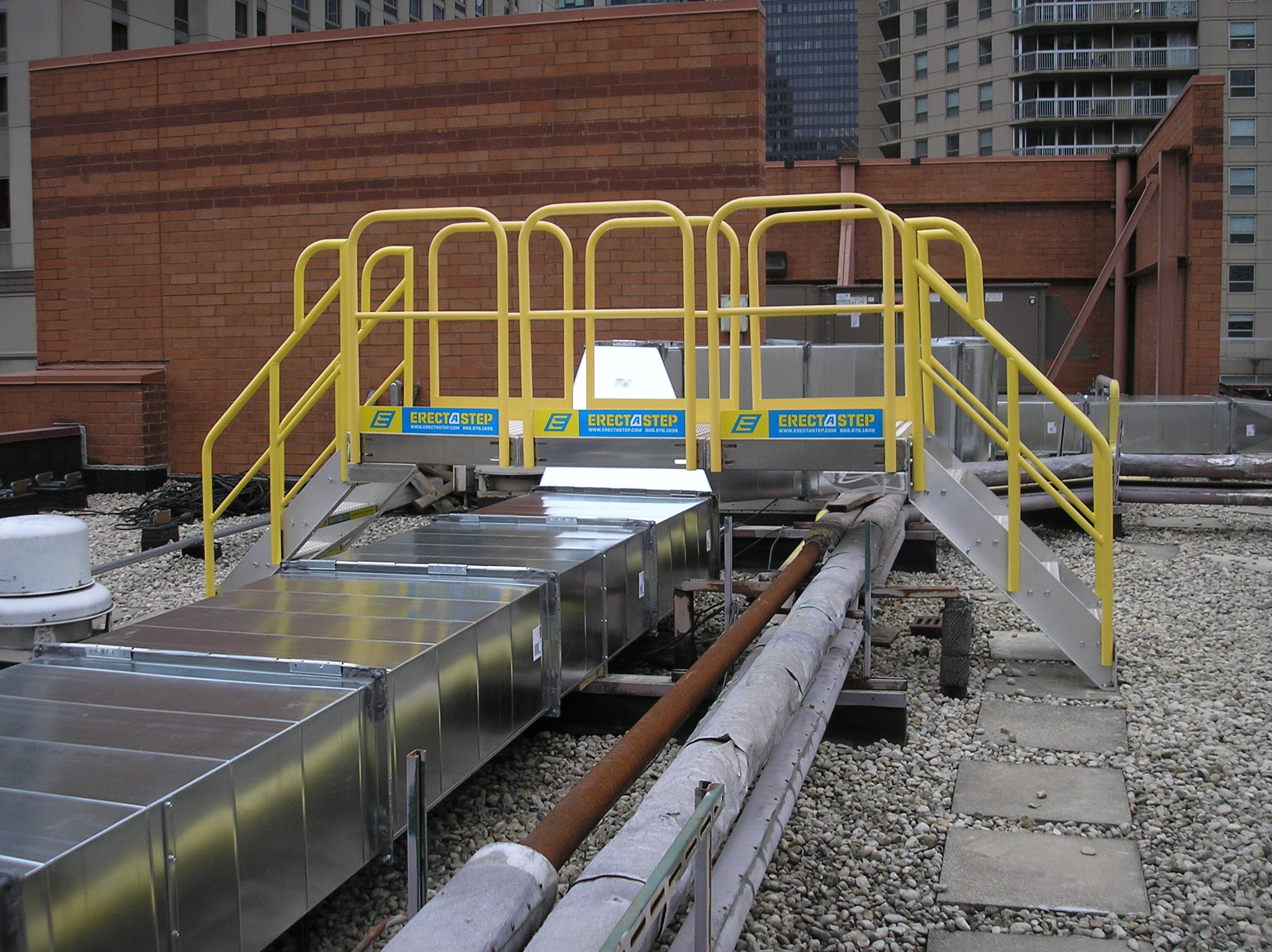 A few years ago, I looked out a Chicago hotel room window at the sub-roof of a skyscraper hotel. A long run of pipes and air ducts cut the roof in half, so that anyone who needed to work on it would have to walk a long way around or climb over. Since there were obvious points of maintenance and other equipment on both sides of the obstructions, I’m guessing that maintenance workers were doing exactly that. They needed a crossover, and a roof top isn’t the easiest place to install one, particularly post-construction.

The type of HVAC, plumbing, ventilation, ducts, skylights, electrical, pipes and other equipment that resides on facility roofs requires regular maintenance, but access to it can be problematic and dangerous. Since roofs are usually designed not to be manned, trip hazards are common. You’ll need safe, OSHA-compliant ways to cross over these various obstacles, and perhaps to safely work on others. 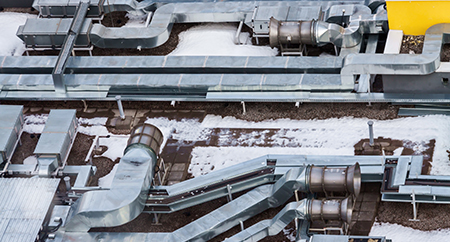 Above: a rooftop with little access due to extensive HVAC ducts and other obstacles

It’s harder to work on rooftops

Warehouses and other interior plant floors make crossovers relatively easy. You usually have a dock door, forklifts and a solid, stable surface that lets you easily bring in a fully-welded crossover and install it with relative ease into a solid concrete floor. You can bring in welders and fabricate one in place pretty easily. That isn’t the case with roofs, where you would have to lift a crossover on with a crane.

Accessibility is an issue for post-construction installation

When adding a crossover to an existing roof, there can be issues simply moving the equipment onto the roof. Rooftop ductwork and pipe layouts may change over time, meaning that many roofs will need new access points, and you’ll have to decide what type of access and where to place it.

According to OSHA, any obstacle taller than 12″ requires a crossover stair

The basic needs tend to break into: crossover stairs, which are straightforward with two sets of stairs on either side of an obstacle, and usually a platform to span over the obstructions. You may also need access stairs that allow you to ascend from one roof level to another with a single staircase and sometimes a platform or landing at the top. HVAC access stairs are placed beside large air conditioning units to allow faster maintenance. They can be a staircase (or two) and a platform/landing that lets workers easily and safely access the equipment.

In all cases, you’ll need to adhere to OSHA and any state or local safety and fall prevention codes. You can opt for almost any kind of crossover for your roof, but the basic choices are: 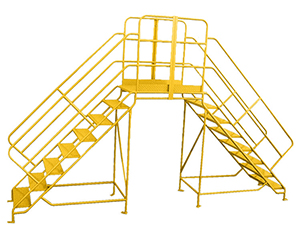 Prefabricated crossovers can be a good fit for roof applications, but be aware of issues with transporting the material to your job site. Also, see U-shaped and crossovers with ladders prefabricated units.

Fabricated crossovers are a good alternative in many situations, but have some specific issues when it comes to rooftops, where accessibility is a question, and where a weather-resistant finish is necessary. 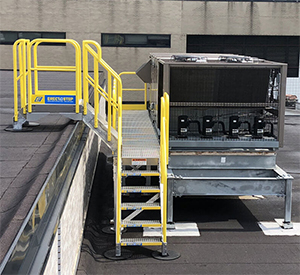 Modular crossovers are built from standard components. How do they rate for rooftops?

One of the better solutions is to build a modular crossover in place, which tends to be lighter and faster to install than fabricating one on the spot.

Most rooftops, unlike concrete floors, cannot be drilled into for anchoring. Commercial roofs are often built-up roof membrane, made of rubber and tar, and shouldn’t be drilled into or used as an anchoring surface for crossovers or other structures. Your crossover should use a non-penetrating anchor method. Crossovers are much lighter than HVAC equipment and can be mounted on base plates. This is an accepted and safe mounting method that should satisfy local building codes.

Modular systems can be ordered with non-penetrating base plates. Some other systems can also use similar plates to anchor the crossover without roof damage. Some other crossover types can also be mounted using this method. The plate is less likely to sway and move under wind pressure, which can cause wear damage on the roof surface. Since it distributes the weight over a larger area, it helps prevent the crossover’s weight from creating depressions on the softer roof materials, which results in less of a “ponding” effect, which can happen with heavier systems.

For OSHA compliance, obstacles that are more than 12″ tall that must be negotiated during ongoing maintenance operations will require a crossover. Some local regulations may also be in play, so be sure to check local building codes in your area for compliance. A licensed professional engineer may be needed for some areas to ensure proper compliance to all regulations. You may also need to meet IBC codes, which a professional engineer can assist with.