How the Movies Get Material Handling Wrong

You see warehouses in movies all the time, but they usually don't do material handling very well If you are in the warehousing or material handling industry, you’ll find yourself identifying warehouse and handling equipment in movies or television shows quite often. Many of us have seen, for instance, the NFL graphics of a large distribution system used on Fox network for years. I’ve pointed out Hytrol conveyors in movies to my wife for years, to the point where she says it first when she sees it.

For fun, we have put together a list of the more famous scenes in entertainment history involving material handling equipment, and how it could have been done better.

Raiders of the Lost Ark – “Top Men”. A the end of the 1980 classic, after all he’s gone through to keep the Ark of the Covenant from Nazi hands, Indiana Jones is never told that it has just been stored away in a massive warehouse. Not only stored in a warehouse, but crated up, numbered and placed in a mishmash stack of similar crates.

The problems here from a warehousing standpoint are serious. First, you have a very heavy, ancient relic being pushed on a platform truck. It’s obvious the man pushing it can barely move it, it’s so heavy.  This is probably not the safest way to handle something as hazardous as the Ark of the Covenant.

Furthermore, the Ark is simply stored among endless piles of boxes and stacked crates. Sure, selectivity isn’t that important in this situation, but it will be hard to find and pick this load if it is ever needed. The other issue is that the Ark is of incalculable value. Crates stacked like that are significantly less stable than if they are stored in pallet racks. I’d probably recommend heavy structural racks given the weight and the importance of the load. Some basic product slotting help would also make it possible to locate and move the Ark much easier it need be.

Also, security should be a consideration. After all, the Nazis still may try to recapture it. Thieves would be after something so valuable. So adding a security cage, or otherwise beefing up security for the entire warehouse is advisable.

Blow: storing dollars. This scene is hardly as famous as the Raiders scene, but it’s a unique material handling issue: storing lots and lots of cash. Johnny Depp’s character, George Jung has made so much illegal cash in the drug smuggling business that he can’t store it all in his apartment. It’s in every drawer, every nook, atop every table, and stacked into corners – an obvious material handling problem with space and product density. 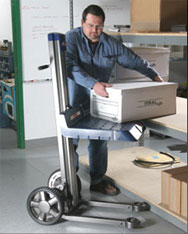 Cash is heavy, too. Consider that he had tens of millions (perhaps hundreds of millions over time) flowing through that house.  Certainly standard racks and shelves have no issue holding this kind of weights (assuming he’s got small bills, it’s heavy by manual standards, but not by storage standards). Since the cash is coming in all the time, Jung has to be able to move it elsewhere eventually. He could buy some high capacity shelving and stack it, but that’s only a temporary solution. You’d still have to unstack and move the cash. The money is all small bills, so assume 300 pounds per million dollars. Still, some sections of records storage shelving and some banker’s boxes to hold the cash ought to do the trick.

Certainly there are ergonomic ways to do this. You can’t forklift it in a house, but you could use something like a Mule Portable Stacker, which is suited to industrial and office use. It would make loading full boxes easier and would cause less back strain to Jung and his associates, and would easily move loads of cash in and out.

Security would be a high consideration as well. Shelving isn’t inherently secure, but any number of security lockers could be utilized as a more secure alternative. can be specified to surround it. If you had the luxury of a full warehouse, storing this load would be easier and probably more secure, but in a confined space like a house, options are more limited.