When should you specify either of these ergonomic lifting tools?

Lifting systems vary widely in type, capacities and sizes. Each is created to meet job-specific requirements of load capacity, cycle times, and lift range. Handling accuracy and smoothness are also considered. The two types of lifting systems addressed here are air balancers and chain hoists.  They do essentially the same job: lifting an item into the air either from storage or a flat surface. So which might work for you?

Lifting a load and placing it where needed is the goal

While load lift is the key function performed by both the air balancer and chain hoist, how that load handles and positions is the main difference between these two lift systems. 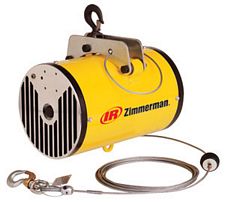 Ideal for repetitive tasks with loads in the 100-500 pound range, air balancers behave like an extension of the operator’s arm and hand motions. They follow the operator’s motions quickly and smoothly, gliding upward, over and down in fluid motion. Often integrated with various types of end effectors, air balancers allow workers to precisely move loads without great physical stress and greater safety than manual lifting can accomplish.

Air balancers create a “no-load” sensation by balancing the load in a weightless suspension as it is moved. This makes manipulating the load easier and more efficient in assembly processes, in particular. Lift heights are generally less than 7′, and the range of motion is within the workstation’s physical space.

Example: An operator grasps the hook at the end of the line hanging from an air balancer. With little effort, he pulls the line until it connects to the load, then with a small effort, lifts the load high enough to clear objects in the line of motion, guiding the load to the new position, and gently lowering the load to the new location. The air balancer keeps the load in a free-floating state until in place and released. 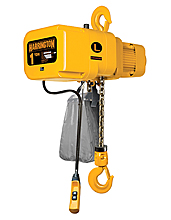 The main advantage of a chain hoist is its load capability – often into the thousands of pounds. Available in manual, pneumatic and electric types, hoists can handle much heavier loads than air balancers. While cycle times may be slower, chain hoists let you move the load higher and farther–across the entire facility to a shipping dock. This would also involve a bridge or gantry crane, but you get the idea.

The load movement involved with a hoist is not as fluid as using an air balancer. Motion perceived consists primarily of up and down, then walking the load to the new position using a crane. To use the hoist, the operator must use both hands to control the chain motion and the lift/lower action (usually controlled by a hand-held pendant with control buttons for up, down and stop functions, unless a manual hoist). It’s the gear ratios that create sufficient torque to lift the heavier loads that hoists can manage.

Keep load and range of motion in mind

When choosing between a hoist or air balancer system, consider the following factors: