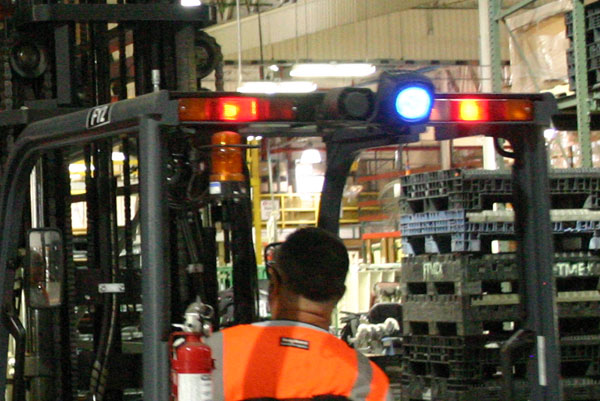 It’s been a sudden transition: many forklifts no longer use flashing strobe or beacon lights and have transitioned to LED “blue light” forklift safety lights that project on the floor rather than flash on the forklift itself. Workers have never liked an excess of flashing lights, but to some extent this is because companies aren’t deploying the beacon lights for the right application. LED floor lights are true warning systems, while beacons are visibility enhancements for already visible trucks.

LED warning lights are projected at the floor, and scientists have explained why the floor is actually more visible, not less. You may perceive movement on the ground easier than you see movement in the air. They warn workers that a lift is coming, while strobes are hidden around the blind corner while the forklift is behind it.

“I always hated those flashing beacons”

Warehouse workers often have a very different take on the value of a safety initiative, and those we asked didn’t hold back when it came to strobe lights on forklifts.

“I always hated the lights that would get mounted under the roof rack,” one said in an online posting.  “How is a blinking light, directly in my line of sight, obscuring my field of vision, making me any safer?” He mentioned that the warehouse guys eventually just covered the strobe light with a cardboard tube or tape. “The thing blinds me, and what good is that? I can already see the forklift when I see that light.” 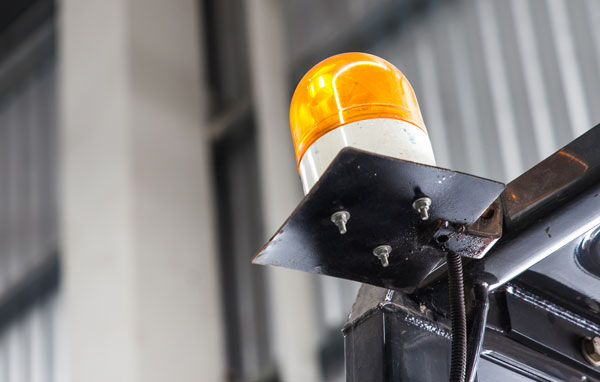 This is because strobes are distracting in the wrong way, at the wrong time. Any warning system is designed to be a distraction, but LEDs that glide on the floor are visible before the forklift is, and don’t interfere with workers’ vision.

Another added: “Really there should just be lights on the ground in all directions to showcase a forklift is coming around the corner. Not a blinking light.” 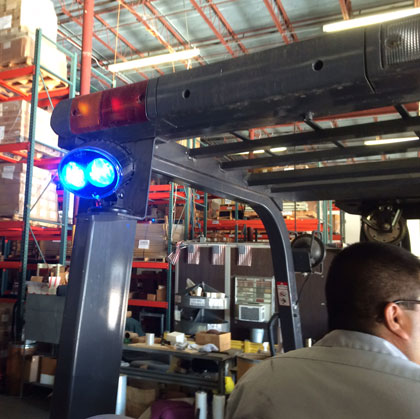 Other workers said strobe-type lights interfered with auto-darkening welding helmets – a big deal in many manufacturing facilities. Others mentioned that they could set off a light curtain for robots, CNC machines or other production equipment designed to shut down in certain circumstances.

But the main complaint with strobe lights is that they are just intrusive, and not in a good way. Since they are mounted on the forklift, and don’t precede it, they provide little assistance at rack aisles, blind corners. People can see the forklift at the same time they see the light.

When should you use strobe lights?

They’re good safety equipment for the correct application. If your warehouse is dark, or you’re working outside at night, they help people see the lift in low light. Floor-projected LED systems are ideal for warning someone that a forklift is somewhere they can’t see; the strobe is to make an already-perceivable forklift more visible.

What about audio alerts?

“We wanted to have all our forklifts equipped with sound-producing devices,” said another warehouse worker. “Anywhere I can’t see the truck, I’d like something to warn me it’s on the way. OSHA specifies horns as sound-producing devices, but workers would prefer that something visual is added, since they may work in loud environments. Another mentioned wanting a device that sounds off on its own, rather than depending on drivers to activate.