In many cases, fans reduce the costs of HVAC while making the plant more comfortable 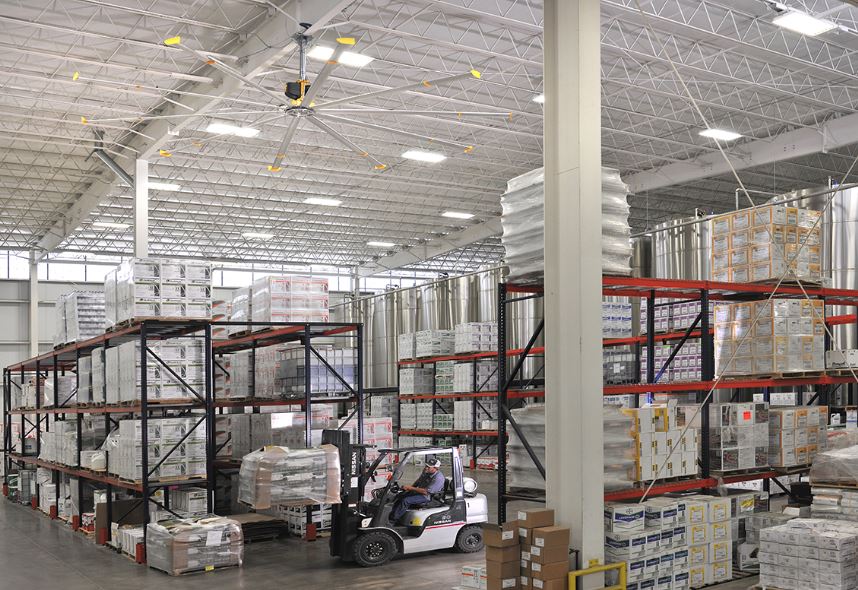 A few weeks ago, we analyzed the reasons it’s sometimes impractical for some facilities to install HVAC. Yet, productivity studies spell out the reasons why cooler work environments reduce errors and increase productivity. If your facility already has air conditioning, why would you need to add HVLS fans?

There are a few reasons, but the primary one is that a combination of air conditioning and fans reduce costs

Fans and air conditioning work very differently. In simple terms, HVAC cools the air but doesn’t do much to move and mix it. That’s the role of fans, and it increases comfort whether or not you have air conditioning. Cold air has to reach all the people you need it to reach and do so economically.

HVLS and other fans don’t reduce temperatures. They make the environment more comfortable and seem cooler to people, meaning your thermostat can be set lower and still deliver a comfortable working environment to your people. Big Ass Fans make a typical warehouse feel 10 degrees cooler than its air temperature, meaning you can set your thermostats lower and still deliver an excellent work environment.

Climate control isn’t cheap, but it’s typically worth it in a hot warehouse or factory. The biggest reason we install fans in air-conditioned facilities is that they help reduce costs, and can actually make cool air more comfortable.

It breaks down this way: If you can raise the thermostat by one degree, you’ll save an average of 4% on HVAC energy costs. So if you can set your thermostat to 75, rather than 70, that’s big savings over the course of a hot summer. HVLS fans require very little power to operate, so a smart implementation lets you turn up the thermostat, reduce energy costs and increase facility comfort all at the same time.

HVAC systems are infamous — particularly in large, open spaces like warehouses — for wildly varying temperatures. This puts stress on your system and forces it to run longer.

It will typically be cooler near vents, and less comfortable the further you get away from dispersion points. This contributes to system inefficiency because you are cranking down the air conditioner to cope with it. But it’s also an operational issue since you want people on the picking line to be just as comfortable as those in the shipping area. You can add ducts and tubing to even it out, but HVLS fans tend to do that very efficiently, along with their other positive attributes. They may be fairly close in terms of cost vs. tubing and ductwork, and certainly don’t limit your use of ceilings.

Example: Assuming a plant in a hot state like Texas has 100 employees earning $15 per hour on average, a Big Ass Fans fan installation could save $83,000 per year and reduce productivity losses by 54%. (These numbers will be affected by a variety of facility factors; contact us to evaluate your specific situation and facility.)

For those areas (like above rack rows or near sprinkler heads) where fans can’t be mounted, thermal equalizers or mounted directional fans can be mounted in concert for both temperature equalization and cost reduction purposes. HVLS systems move massive air volumes, so they can affect many parts of a facility — not just the area directly beneath them.

Temperature destratification — and why it matters

Fans help even out the warm air that accumulates near the ceiling, forcing cold air down. In the summer, warm ceilings and cooler floors may seem desirable, but actually increase air conditioning costs, since your thermostats may sit between the coolest air (on the floor) and your warmest (at the ceiling). This forces your systems to work harder and run longer to meet the temperature goals. Constantly moving, evenly-cooled air is more economical. HVAC savings can be as much as 15% with destratified air vs. temperature stratification.

Induction ducts, which are pulling air from the facility and feeding it to HVAC are often mounted on the ceiling or higher on the wall, meaning that you’re feeding the system warmer air that it constantly tries to cool. 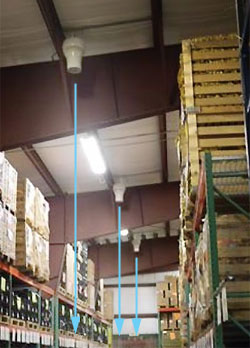 For those areas where HVLS fans can’t be installed, like over rack rows, thermal destratification fans can also be used to circulate air.

When facility air is too hot and is also stagnant, you risk a sweaty slab due to the fact that warm air holds more moisture than cool air. When the air reaches the dew point (the air can’t contain moisture), it releases that moisture onto the ground. That’s when condensation may form on your slab. This is typically a seasonal problem, particularly in autumn or spring months. For warehouses, factories and other industrial facilities with large, dense structures, the problem magnifies. The floor temperature can be twenty degrees cooler than the air.

Sweaty slabs can cause slip and fall accidents, and in some cases may also cause structural integrity problems. In extreme cases, mold can form due to moisture.

Big Ass Fans help address the issue by circulating and mixing the air throughout a facility. Warm stagnant air isn’t allowed to cool enough to form puddles. HVLS fans also help warm the floor, which helps combat the temperature discrepancy and keep it about the dew point.

Does your air-conditioned facility need an HVLS fan?

In many cases, it does. Because fans reduce the costs of air conditioning, and because they can increase comfort even in cooled facilities, they are frequently installed in warehouses, hangars, factories and industrial plants of all types.