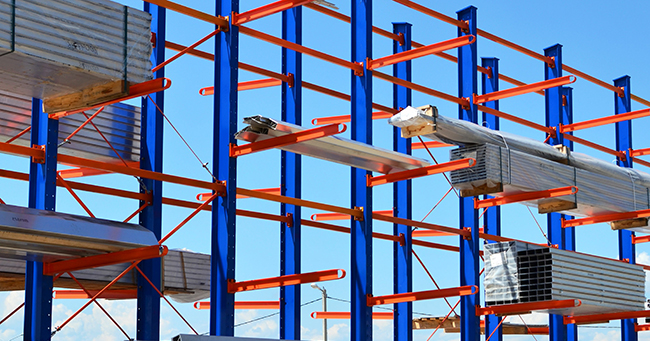 Cantilever racks are built to handle long, heavy loads such as pipe or steel tube, lumber, wood or metal sheets, furniture, elongated crates and lots more. The design is simple–a central column with cantilevered arms extending from one or both sides. Safety is critical in any warehousing or industrial storage area, including cantilever storage. Given the heavy and bulky nature of the loads, here are some things you should be aware of to make sure your racks are safe.

Because it bears heavy loads and is subject to forklift impacts, cantilever racks should be inspected. MHI’s rack safety group recommends at least one inspection per year as a process. If the rack is struck or otherwise compromised, inspect it immediately. Things to look for should include damaged components (arms, bases, posts) and any loose hardware or anchoring bolts. You should unload any damaged areas for repair or replacement before using the rack again.

The number of columns and arms needed to support a given load depends on a variety of factors, including weight, load sag, size and more. Perhaps the best way to ensure a successful and safe rack system is to make sure it’s specified to handle the size, shape and weight of your intended load. Our video on cantilever rack specification is a good starting point:

You can’t stop operator error from happening, but the design of your rack system can reduce the chances. One way to engineer accident-reduction into the system is to identify places where operators make mistakes an add tolerance. Aisle width is a good place to start since the load being transported is usually wide for a cantilever rack application. This means the driver has a wide load that could brush against extended cantilever arms. Giving that driver more space helps them not to hit those extended arms and cause a potential collision. 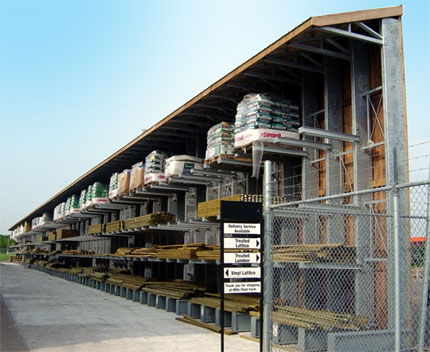 Cantilever rack is often used outdoors. You will see it in pipe yards or adjoining fabrication facilities and in other places where it’s exposed to the wind and elements. Many lumberyards store tons of timber, building materials and sheet materials on outdoor racks, which is perfectly safe, if the rack is specified and loaded the right ways. Some things to consider:

If you want to store long, heavy materials outdoors, it’s a good idea to always contact a qualified rack company for an engineered design.

Watch out for vertical impacts when loading or unloading

Train your forklift drivers about the dangers of loading or unloading in ways that slam the cantilevered arms. When placing loads, don’t allow the weight to hit the arms with any speed. The load should be gently placed on the arms in an evenly-distributed way. This means the load should never be off-center, where it can place uneven stress on individual arms. When removing loads, don’t push against the bottom of any arms above the shelf being unloaded, which could pop the arms out of their connectors.

Make sure your load is stable

Because cantilever racks are built for long loads, they need to fight load sag–a situation that occurs when loads aren’t adequately stiff between arms and sag beneath their own weight. Forklifts can be outfitted with special attachments that help support the load during placement or extraction. The design of your rack system is the best way to combat this. Adding more arms reduces sag and helps drivers place and pick faster and easier.