Which order picking automation system might work best for you? 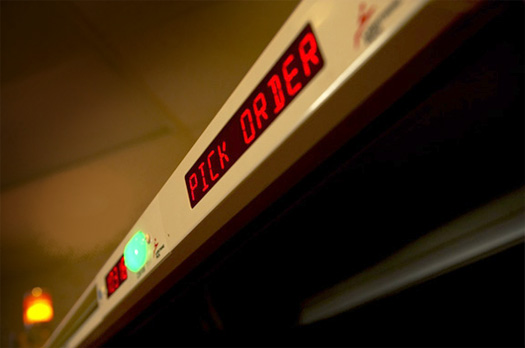 These systems are at their best for open case picking systems. When you’re picking full pallets and cases, they’re less useful, although that depends on the situation. You can mix these systems in a single facility of pick pod area for maximum effect with inventory slotted to match the necessary profile. Each has a role, depending on what you’re picking, how your facility is set up, and the nature of your picking methodology. What might be best for a given situation?

Pick to light systems utilize indicator lights to direct manual picking. These systems are ideal for batch picking operations, in particular in a defined area where space is restricted. PTL also helps reduce error rates while it increases picking speeds. If you are picking from conveyors, a very good case can be made that pick-to-light is the most accurate and fastest picking automation system, with the best velocity and highest throughput. In terms of investment, pick to light often requires a larger initial investment compared to voice or RF, but it’s significantly more productive for high velocity applications.

Best when: the picks are smaller and the pick face area is dense, allowing pickers to focus quickly on the work. When the picks come from a defined area, such as flow rack pick faces or a carousel, nothing beats light-directed picking. (Most expensive, medium long term costs, most accurate, fastest.)

If your application requires less velocity, voice directed systems may be the best option. Voice is best for those lower velocity SKUs, with longer transit time between pick locations. Voice is also useful for full case and pallet picking. Voice tends to have higher training costs than light-directed systems, and will also have recurring training of newer employees. But, voice systems typically don’t require new storage equipment or revised plant layouts. Good voice systems let you monitor pick performance and time between picks. Voice systems also allow people to work both hands and eye free, meaning they are looking at the pick bins, not at an indicator.

RF systems have the lowest capital investment, compared to voice and light systems but are also slower, and require pickers to utilize guns or other devices. But they are dramatically more accurate and faster than paper based systems. The usefulness of RF picking may increase as new wearable technology is developed.

Best when: an accuracy and productivity boost is needed vs. a manual system, and where absolute speed isn’t as vital. (Least expensive capital investment, higher training/long term costs, often requires a handheld device, and is less accurate and slower than light directed or voice directed concepts.)

The above table is for general applications. Specific applications require thorough analysis.