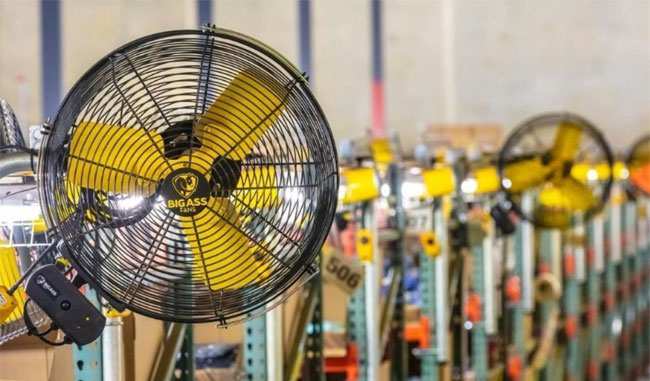 HVLS fans are an ideal way to make warehouses and other industrial facilities more comfortable and reduce the cost of air conditioning, but they usually can’t be installed above pallet racks, which dominate the floor spaces of most warehouses.

Although pallet racks are the most common air flow obstructions, other issues may also make it difficult to use HVLS systems in certain areas of a facility. Those include ceiling height, electrical issues, ducts, sprinklers, pipes and other large equipment or walls.

Rack rows don’t allow the air to flow as well as open spaces, so other means are needed to circulate air between aisles. Even if you have the vertical space above a rack system to hang a fan, the racks themselves may trap the air.

Airflow between rows isn’t typically as much of an issue as in more commonly-trafficked areas such as receiving and shipping areas, pick zones, work cells, and similar places where people frequently work. If people aren’t spending a lot of time in a row, it may not require circulation directly. However, direct comfort in the rows may not be the only factor, since “still air” may not adequately mix for ideal temperature control and flow when left to sit in these areas.

What about air-conditioned facilities?

Even if traffic between those aisles is fairly low, the air between them is likely going to be less mixed, hotter and less comfortable than air in open spaces where ductwork efficiently distributes it. This makes your HVAC system work harder than it should have to in a large, empty space. Finding ways to effectively mix the air isn’t just about the comfort level between aisles. It directly affects HVAC efficiency and costs.

Because they move large quantities of air, HVLS fans don’t have to hang over every square foot of a warehouse space to be effective. Generally, they can be mounted over clear spaces like the shipping/receiving area and still push air elsewhere.

It’s best to map the layout of a fan system to ensure you have enough fans to cover the physical space. In the drawing above, a single fan near the shipping dock pushes air to the floor and down the aisles. Directional fans are mounted to pull that air throughout the system and create the necessary airflow. These fans can be installed on building columns, rack uprights or ceiling supports, depending on facility and site factors.

These fans can be outfitted with motion sensors that allow you to run them only while there is activity in the aisle, so those infrequently-used aisles can still be outfitted for circulation, but the fans don’t have to run when aisles are empty.

A combination of HVLS fans, directional fans and/or thermal equalizers will distribute air throughout a large distribution facility, increasing comfort even in deep rack aisles where air struggles to circulate

There are also excellent options available with thermal equalizing fans, which push air from the ceiling down to the floor to create a constant flow. Unlike HVLS systems, these fans can hang between rack rows and mix air directly above the pallet rack. Combined with an HVLS system, they help move air through the “canyons” between high-density storage rack aisles.

If you operate a large warehouse with deep rack aisles, you’ll probably need to have an airflow strategy that deals with tall rack aisles and stale air. We can assist you with a free layout that moves air correctly and makes the entire warehouse more comfortable and efficient.