When to Transport Loads with Overhead Conveyor Systems 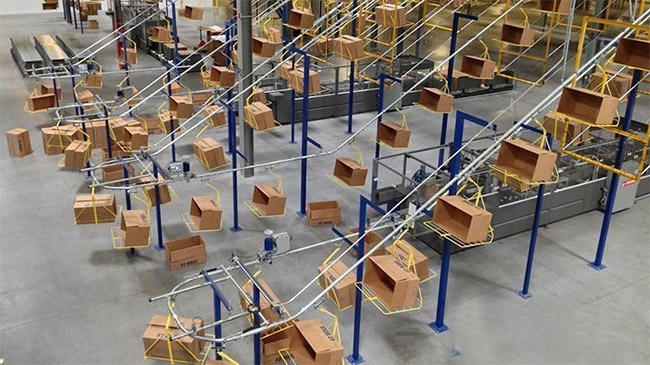 Overhead conveyors are an efficient way to transport products on an assembly line or in a distribution facility. For the right load in the right situation, they’re the most economical and efficient way to convey products. What are some of the characteristics of a good overhead load?

The definition of an overhead conveyor

Belt and roller conveyors are frequently installed above the ground to free up floor space, for safety, to cross obstacles or other reasons. On a conventional conveyor, the load sits on a belt or rollers. These conveyors aren’t “overhead” systems even though they’re off the ground. With true overhead conveyor systems, loads are suspended on task-specific carriers and are conveyed along a rail system. We’ll touch a bit on suspended belt and roller systems, but this article focuses on task-specific overhead conveyors that utilize rail systems and hangers.

Overhead conveyors can be manual or powered and use a single rail to transport the load. They follow a single continuous path, which can be very long (hundreds or thousands of feet) and can easily and fluidly change directions vertically or horizontally.

Convey the things they say can’t be conveyed

There are some loads that are considered impossible to convey. This may be because the load can’t rest on a flat surface, because the conveyor can’t handle a tough environment (caustic chemicals, paint, etc.), because the temperatures are too extreme or when human handling might cause issues with the load. So when should you consider an overhead system?

When the load can’t easily sit on a conveyor 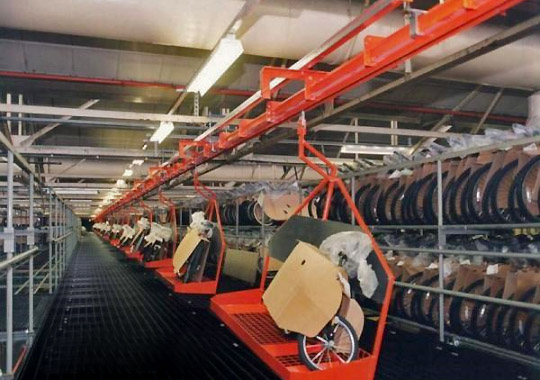 Above: carriages for unbalanced loads.

When your load is odd-shaped, unbalanced or difficult to seat, there may be challenges resting on a flat belt or rollers. Some loads have distributed weights that could damage them if sat flat. There are certainly ways to deal with that, including bowtie rollers for pipes, or cleats that can contain certain shapes, but those may not apply to your product. With an overhead conveyor, the load’s shape and ability to rest on a surface is largely irrelevant, since it can be suspended in a carrier or from a line made just for it. 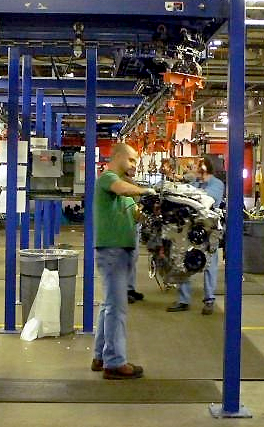 We see this in paint lines; the spray must reach every corner of the load, so it can’t sit on any surface. But this can also be a factor for progressive assembly in operations where workers may need to access the top, bottom and all sides. For some applications, this can be achieved with a conventional belt or roller conveyor and workstation hoists or balancers, but it may be less expensive and easier with a suspended load. Overhead systems allow people to work on the load at ergonomically correct elevations.

Balancers and hoists may provide more precise control of the load (raising or lowering it, or spinning it in place in some instances). This depends on the operation and load characteristics for any situation.

Difficult environments are tough on all machinery–including conveyors. Overhead systems can transport the loads through harsh environments like caustic washers, spray or paint application booths and very hot drying and baking ovens.

Paint booths: This is a common application for overhead conveyors, which allow you to suspend the load for better paint coverage.

Caustic chemicals & other substances: You should remove human interaction with these areas as much as possible. Overhead conveyors are ideal for transporting a component through such environments without damaging the load or causing an overload of cleaning and maintenance. 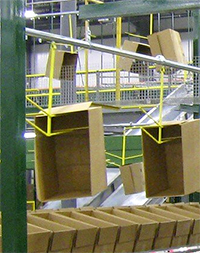 In many distribution centers, split case picking is frequently used for order fulfillment. In these operations, cartons are emptied, and the next carton rolls forward to replace it. Order pickers must then dispose of the empty box. Whether your workers accumulate boxes or dispose of them immediately, empties have to be dealt with. There are a few ways to do this.

Conveyors can also be used to deliver fresh boxes to a packing area in some operations. When it comes to conveying, we have seen it done either with overhead or flat belt conveyors. Space and outcomes are usually the deciding factors.

There are options on how to convey almost any item that can include overhead, belt, roller or low-profile options, and it can usually be done with standard systems and components, if designed and implemented correctly. If you need help finding a way to transport, buffer or store products correctly, let us know.